In the Canadian Rockies, at the border between British Columbia and Alberta Provinces, lies an expanse of mountainous territory so vast and so beautiful that Canada has created six nearly contiguous National Parks and several Provincial Parks to protect this sphere of nature.  The area is filled with mountain tops, glaciers, waterfalls, lush valleys, deep forests, and shimmering alpine lakes of a turquoise hue that appear surreal.  The lakes and waterfalls were the focus on our most recent tour that started in Banff National Park and continued into Yoho National Park. 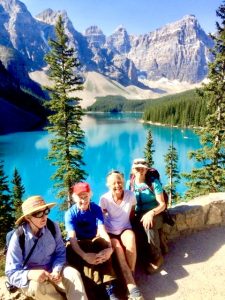 Day One: Banff, the most well known of the Canadian National Parks, contains the popular tourist towns of Banff and Lake Louise, and this is where our tour started. Lake Louise looks like a valuable turquoise gem, protected by towering mountains and watched over by the castle-like Chateau at the end of the Lake. Our hike to the Tea House at neighboring Lake Agnes gave us stunning views of the area. 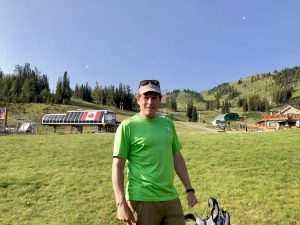 Day Two: the second day, we drove into a remote ski area where we could take advantage of the chairlift to whisk us to higher elevations for an even better vantage point. From there, we enjoyed a loop hike around several small and icy alpine lakes. As we were above timberline, we had unrestrained views of the British Columbia-Alberta border, which is also the Banff-Kootenay National Parks border. 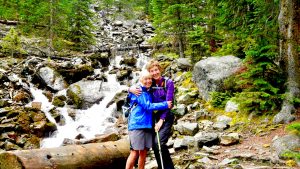 Day Three: the next day, the van took us north and west into Yoho National Park. The park is named after a Cree expression for awe and wonder. Surely our awe and wonder only grew as we climbed out of the Takakkaw Valley on the Iceline trail to walk right along the base of the Emerald Glacier.  We were surrounded by snow capped peaks, thundering waterfalls and melting snowfields, whose waters all collected in sparkling lakes and tumbling rivers running through the valleys. 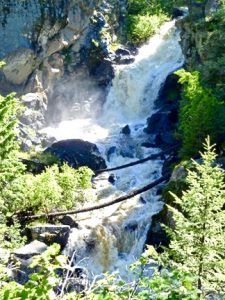 Day Four: our fourth day of the trip included an amazing 12-mile hike along the Emerald Triangle that included mountain passes, ancient fossil beds and crystal blue lakes. Some of us took a shorter option which was equally stunning as we explored two major water falls – Wapta Falls and Takakkaw Falls, and walked along the shores of Emerald Lake.  The blues and greens of the lake reflected the palate of colors omnipresent in the soaring granite mountains, the dense evergreen forests, the vibrant flower-filled meadows, and eventually the brilliant glow of the sunset.

Day Five: we had a change of plans on the next day and chose to hike to Helen Lake from the Icefields Parkway, which brought us back into Banff National Park. Our efforts on the initial climb were rewarded with beautiful views from the ridge line as we hiked to the lake. The flowers and marmots were abundant in the area as flora and fauna alike take strength from the vivid turquoise, glacial-melt waters. 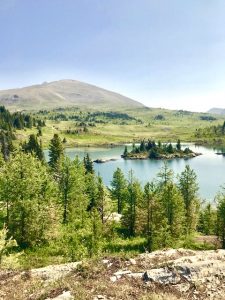 Day Six: the last day allowed for one more lake walk on our final day in Yoho National Park. Our walk to Sherbrooke Lake was gentle, yet invigorating. One can never tire of the magical luminance of these glacier lakes and we soaked in all the beauty we could. The relatively short hike left us time to enjoy a celebratory lunch back in the community of Banff at our secret lunch spot, before the conclusion of our tour and our departure from the magnificent Canadian Rockies to go back home.