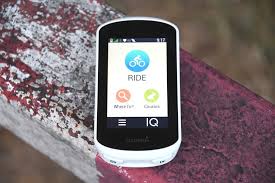 I finally did it! I purchased a Garmin GPS device to guide me on bike rides in unfamiliar places.

For this timid techy, I must say it was a bit intimidating, especially because my 25-year-old daughter accompanied me to REI and rolled her eyes with each question I asked the Garmin guru.

“I’ll be the one setting it up,” she said smugly, which made me more determined than ever to do it on my own!

I looked at all the Garmin options and purchased a Garmin Explorer Edge. It had all the functionality I wanted in terms of mapping and navigation and lacked wattage and features I don’t need. And the bonus was that it only cost $250.

I was eager to get home and figure it out. The instruction manual that accompanied the device didn’t seem to help at all, so I did what any 20-something would do. I turned to YouTube for backup.  After a bit of digging, I found a few YouTube videos that seemed pretty explanatory and jumped right in.

First, I had to pair the device to my phone. I had no idea what this meant until the device started beeping and I saw texts rolling in. AHA! The pairing was a success.

A few more views of the video and I learned how to find maps on my computer and download them onto the device. I also learned how to create maps and how to search for locations and access routes by simply typing in an address.

After several hours, I was ready to actually try the Garmin on the road. The first address I input was my daughters. I’d never ridden to her house before, so I thought I would see what bike lanes and paths the device would select for my route.

At first I thought I had to follow the tiny arrow on the path, but then I noticed an arrow and turn-by-turn directions in the upper left corner. I also quickly discovered that an approaching turn was noted with a quick beep and as I neared the turn, the beeps got more frequent and insistent. If I missed the turn, I got another beep and a message to do a U-turn and get back on the route.

I have to say, the Garmin route to my daughter’s house was safe and solid. It kept me off busy streets and didn’t seem to add distance. I was happy to have the beeps to get my attention.

I’ve had the device for a few weeks now and what I’ve discovered is the more that I know, the more I realize I don’t know. I am currently trying to find my way through the desert southwest. Every now and then, it does what I expect. Often, it does not.

I know that on our Timberline tours, I can use this device to follow the routes for each day. Timberline will provide a .gpx file, and when I download that file, I can see the route and the cue notes that have been added in. The cues have helpful information that the device can’t create on its own,  like where the grocery stores are, or where the pavement is smoothest or when to look out for railroad tracks, and the likes.  Then it is super easy to find my way.

In September, I am off to Hungary and Slovenia, and I am hoping to have it dialed in by then. My goal is navigate from point-to-point without pulling out a map at every intersection.  I waited a very long time to make my purchase, and now that I’ve got my Garmin firmly attached to my handlebars, I feel like I am finally heading in the right direction.